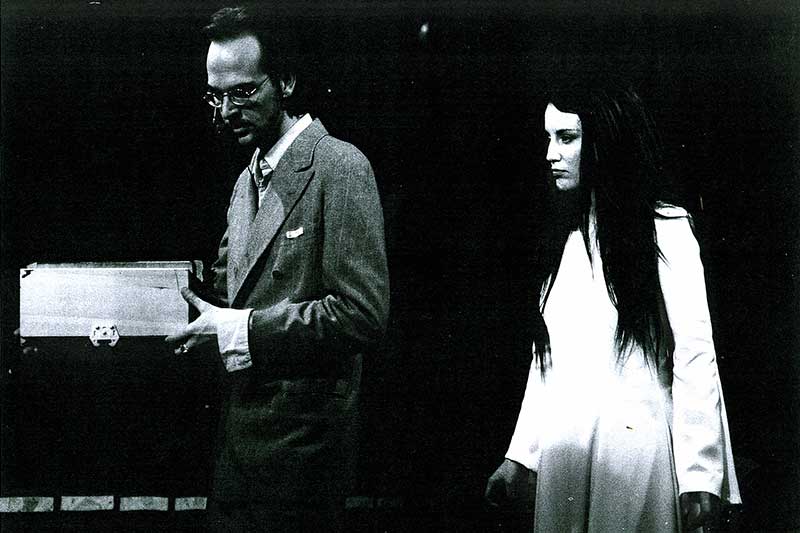 Currently on display for educational purposes only

The Alistair Trilogy was created through a workshop process spanning the course of 1993. Each of the three acts was presented individually at Rhubarb!, The Toronto Fringe and Summerworks festivals. Peter Hinton, who was then working at Theatre Passe Muraille, invited the trilogy to be performed in TPM’s backspace in 1994. The final production was nominated for Dora awards and won the Chalmers Award in 1995.

The Alistair Trilogy is recognized as the production that launched STO Union onto the national scene.

The Alistair Trilogy is a powerful and visceral experience about one woman’s attempt to find her place within some of the ‘classics of the theatre world. Her search shows that the central characters in popular European narratives are primarily women either going mad, being murdered or committing suicide. Which such embedded narratives what hope does a contemporary woman have of finding her way in this culture?

Written and directed by Nadia Ross and Diane Cave

“if you like a well-done play – with bold, colourful performances, arresting imagery and pulse-quickening action – this is just what you are looking for…A sympathetic, disciplined and hard-working cast, led by the commanding presence of Nadia Ross (who plays all of the female characters), doesn’t miss a beat for the entire hour-plus of the production.”

“Cave and Ross show a collective aptitude for theatrical expression that is consistently impressive, sometimes breathtakingly so…. Ross… is a striking presence throughout as she portrays a haunting gallery of female victims”

“A mesmerizing theatrical experience…a breathtaking experience not to be missed”

“Each story is told with an intensity of language and an intensity of performance that is startling. The repetition of certain simple but haunting images… is what this production truly theatrical…Ross is mesmerizing, and the entire cast is fully committed to this gothic work.