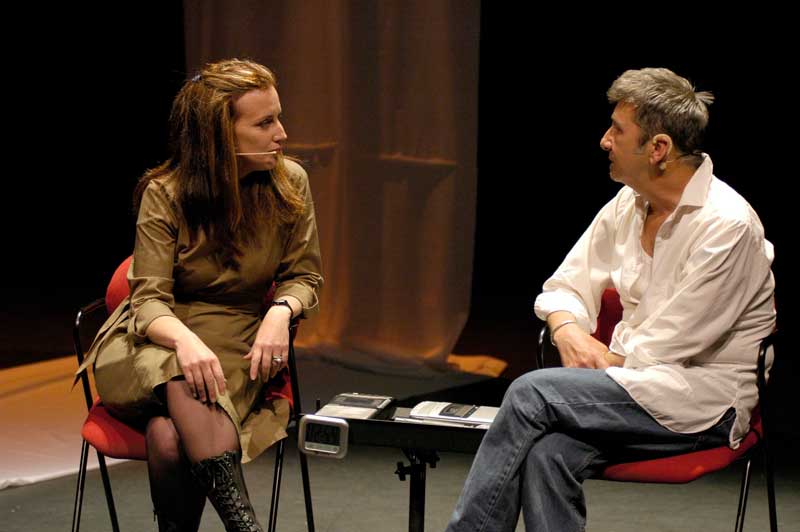 “Infinitely generous and disarming” (Der Standard, Vienna Austria), 7 Important Things is a touching and idiosyncratic work that “swivels with casual elegance between narration, enactment and improvised discussion” (The Age, Melbourne, Australia). STO Union continues its pursuit of a dramaturgy that is ‘so simple it could hardly be more complex’ (Stuttgarter Zeitung).

Nadia Ross turns her attention onto the real-life story of collaborator George Acheson, a man who has spent his life trying to find for himself a ‘way to live’ in a society he feels no kinship with.

In 1966, at the age of 16, George was kicked out of his house because he would not cut his hair. Now a barber by profession currently living and working in a small village in Quebec, George faces the irony of his fate and looks to the past in an attempt to reconcile a life profoundly marked by the times. Born in 1950, George was an active participant in two counter-cultural movements of the last half of the 20th century. He immersed himself in the social and political upheavals of the 1960s and, after the movement fizzled out, he found himself working in London, England just as the Punk movement was starting to build. Decades later, George sees himself as an invisible, generic, middle-aged man and as such, he has a story to tell. Ross and Acheson, in this ‘fine theatre jewel… the two Davids show that they are always more intelligent, more humorous and more talented than all Goliaths of this world” (Frankfurter Rundschau).

One of STO Union’s most important productions to date, 7 Important Things is a legacy left behind by the late George Acheson, Ross’s great long-time friend and collaborator who died in the fall of 2020.

“This simple little act was shocking, not because George looked ugly or interesting, but simply because he did it. Because, for the first time, he looks at us. What did we see? It must be for each person to answer for themselves, or not to answer. It is the kind of action that makes art, art. It was a revolutionary act that touched half of the audience to tears. The rest waited until they got home. And some are still crying, just thinking about it. Common to all revolutionary acts is: courage. That George turned to look at the audience in full confidence that it would work, that it would not be embarrassing, or sentimental, is an expression of such courage, the kind that is needed to create art.”

“…a remarkably simple and poignant performance. Nadia Ross interviews George in short sequences with different headlines, seemingly improvised. There are images of a life and of an era, from the 1960s till now. It is a time that has always been aware of itself, a time in which the people of the western world have been occupied by their life choices. We follow George’s journey, an image of being an outsider and to some extent, it also shows the society he opted out of.

The Wednesday night show was full of captivated high school students following the story. They see it with their eyes and I, the same age as George, see it with my own. It’s like looking through a telescope from both ends.

For those whose future stretches out in the darkness, this gives an idea of how it looks at the other end.”

“By far the best Canadian performance which I saw was ” 7 Important Things” by Nadia Ross, who is more famous now in Europe than in her homeland (” Who? Diana Ross? ”, asks a Montreal Theatre professor, proving the old adage that you can not be a prophet in your own country). The latest production by STO Union from Ottawa, which performed in Berlin in the spring, is a fine theatre jewel, no more and no less than a biography put to stage. George Acheson, rebel, hippy, anti-Viet Nam activist, has lived through all the stops between Flower Power and the underground; as he stands on stage with Nadia Ross, he is the epitome of a wonderfully old-fashioned, principled man, ever so faithful to the generation from 1968. With interviews, self-reflections and happenings the two Davids show that they are always more intelligent, more humorous and more talented than all Goliaths of this world. The story is presented without self-righteousness or pretentiousness, covering the life of a man whose father kicked him out of the house because he refused, at the age of 16, to have his hair cut. Now, reaching 60, he earns his living as a barber. Ross presents this with intelligence and irony, using simple means and strict form, and from that, this ‘portrait of the artist as a young man tells us more about the glory and the misery of this seemingly distant period of protest than any books or statistics ever could. George, who never became a pop star nor a famous author, and this is perhaps why he has remained so authentic, lists his 7 most important things as Friendship, music, discussion, boots, humour, courage and modesty.”

“7 Important Things is a wondrous evocation of the 1960s, very simply done….beguiling and thought-provoking. That he (Acheson) is not a trained actor is obvious. He’s a bred-in-the-bone performer, however, and when he sings, briefly, his voice is achingly beautiful.”

Catherine Lawson, The Ottawa Citizen May 2007

“What makes Acheson’s life remarkable is his “bring it on” attitude despite having seen both hope and failure. By volunteering his life story for this performance, he makes it clear that his passion for counterculture has not died with the failure of the various movements; there’s still a genuine yearning for success even where those fights for utopia have failed. And for those tackling climate change, preventing globalization or protesting the war on terror, his experience acts as an eerie prophecy of what may happen concerning our present idealistic fervour.”